Who are the ghostly voices we record on both audio-only digital recorders and spirit boxes?

As we've developed in the previous articles in this series, these devices seem to produce authentic communication. But what is the intelligence behind such electronic phenomena? 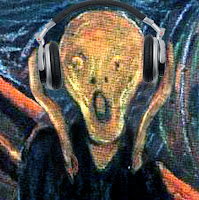 It's time to address who -- or what -- is talking to paranormal investigators when we use ITC to record EVP.

This is the next topic in a series of articles on Instrumental TransCommunication (ITC) and Electronic Voice Phenomena (EVP) and their role in paranormal investigating. If you missed the first article in the series, click here; the second, click here; and the third, click here.

For this article, we use case studies from our own investigations to illustrate the perplexity of identifying the sources of EVP.

Recall from Part 2 that these voices are not produced by human vocal cords. Whether the voices occur on digital recordings or through ghost boxes, EVP are not disembodied voices since they occur as the result of electronics and therefore produce human-like speech but not human speech.

This observation leads us to challenge the fundamental assumption that  "female voices" originate with  female spirits and "male voices" originate with male spirits. For one thing, we don't even know if gender is relevant for some unknown Other Side! (A good analog may be the paranormal concept of reincarnation, where  disembodied souls may well re-embody in the opposite gender. In effect, that belief system describes the soul as genderless.)

It's particularly tempting to assign gender to audio-only recordings we've captured on digital recorders. After all, these voice phenomena seem to be produced by a more direct source. But audio-only EVP are still manipulations of instrumental equipment, and we've yet to hear voices on site with our own ears: The sounds we capture only become discernible through later amplification and sometimes by slowing down the recordings to make the EVP more resemble the delivery speed we expect from normal human speech. (Faster-than-"normal" delivery is a typically reported characteristic of EVP.)

One example suffices to make our point.

When we investigated the Forest Queen Hotel in Crested Butte, Colo., we discovered on later analysis that we'd captured what we assumed was the EVP of a former prostitute named "Liz-Liz," who had reportedly jumped to her death from the window of the hotel's upper-floor Room 4.

Listen to the following to see if you think that EVP sounds like a female spirit:

At the time of the investigation, a housekeeping staffer told us the prostitute's name was Thelma, but our subsequent research revealed her name was actually Elizabeth, or Liz-Liz. Either way, we requested -- and got -- an interaction that sounds feminine in pitch to us. But then, that's what we expected. Again, no physical anatomical human organs produced this EVP. Neither we nor anyone else understands how this electronic production takes place. We only know that the response came almost immediately after we asked for interaction.

Was is it produced by the surviving personality of Liz-Liz? Maybe. Or maybe the EVP results from some other source. Since we discovered the EVP only later, no true conversation took place to clarify who -- or what -- produced the "voice."

The capture of this EVP suggests we need to return to that hotel to investigate further, hopefully initiating a more sustained conversation with whatever created the EVP we recorded.

We couldn't make out what the voice actually says, only that it sounds like speech. Such electronic captures are called Class C EVP, or electronic voices that are difficult to understand. (Class A EVP are voices most people can understand if amplified while Class B EVP are amplified voices where not everyone will agree on the same meaning for the words.)

The supposed gender becomes even more problematic for EVP we've captured by ghost box since any non-physical intelligence using such a device must rely on available sounds. Our ghost box doesn't scan radio frequencies as a source of vocabulary. Instead, we use a box that generates only random allophones -- the box supplies no actual words -- that must be assembled into words, phrases, and sentences. As a result, if the available random sounds have a higher pitch, the EVP will "sound" feminine; if random sounds happen to have a lower pitch, they'll sound masculine.

Using ITC of this nature may assist entities from the Other Side to produce EVP, but we're even further away from trusting pitch to assign gender.

For example, listen to this EVP produced by our EchoVox ghost box at the Windsor Hotel in Del Norte, Colo.:

What intrigues us most about this recording -- well, apart from the recognition of our names even though we didn't provide that information during the session! -- is the way three "voices" work together to complete one sentence. Are we interacting with three different entities acting in synchronized, coordinated effort to communicate, or merely one unknown entity using the medley of available sounds generated by the EchoVox?

The latter seems more plausible to us -- if we can be permitted to suggest plausibility at all!

Although our discussion so far seems to take us even further away from identifying the sources of EVP, our intent is to frame the question in a broader way that might help explain what's going on -- the subject (with more examples) of the final installment in this series.

We're actually having as much fun analyzing the results of our investigations over the past year as we did conducting those investigations for our book, WILD WEST GHOSTS.

There are puzzling experiences and encounters aplenty out there, and you just may want to pick up a copy of the book for either armchair musings of your own or else as a guide for some of your expeditions into the fascinating world of the paranormal.

You can pick up the book as either an e-read or a trade paperback. Visit our Website to learn more.

In the meantime, happy hunting!
Posted by Kym-n-Mark Todd at 6:01 PM