Silverville - Where Anything Is Possible

Silverville -- it's a weird world, and that's why we love it.

The place where the whole series takes place operates under its own set of alternative rules. After all, the

disclaimer on every book cover reminds readers, "Silverville - Where Anything Is Possible."

Whatever explanation we're willing to supply about these rules (and yes, we know what they are -- at least, we know most of them) we always try to put into the mouths of questionable or easily discredited characters. For example, in Little Greed Men, we use Brother Martin, the religious nut from the Church of the Holy Grail, to reveal that odd events in Silverville may have something to do with all the converging ley lines.

But while you wait to gather those character revelations in the various books, here's a quick guide to some of the major rules we follow:
(Hope you caught we revealed the working title and premise for Book Four in the rules above.)

We can hardly believe that we almost didn't take the detour that first led us to Silverville. Fortunately, we've learned our lesson: It's those spontaneous stops along the journey that lead to the real spice of life. It's certainly provided the seasoning we needed to settle in and savor what keeps us coming back. (Oh my, did we just mix our metaphors?)

And, of course, we hope these inexplicable rules encourage Silverville fans to plan their next reading vacation in this little ol' Colorado mountain town, where anything is possible.

A Sneak-Peek from forthcoming Silverville Saga, #3

This week, we're pleased to share a scene from forthcoming Silverville Saga Book #3: The Magicke Outhouse. 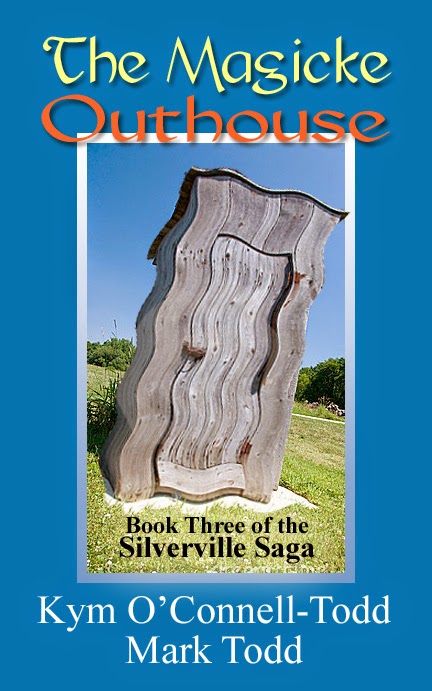 Most folks envision a time portal as something futuristic, flashy, and high tech. But most folks haven't visited Silverville, where anything is possible. Might have something to do with all the intersecting ley lines over the locale, or with the magical fungus growing inside one humble little building -- or both.

In this scene, local entrepreneur Buford Price and his perky, quirky co-workers are already trying to cash in on the time portal. Buford & Co. call themselves KA CATCHERS (Egyptian mysticism, etc., but that's more back story than you need for now), and they know the machine transports only a traveler's consciousness to any desired place and time. But there's a catch: The traveler has to settle for temporarily possessing a random body at the destination.

In this excerpt, our fave new character, April Schauers, and her co-worker, Micah Musil, are in for more than one surprise.

April followed Micah and the foreigner who called himself "Mr. Smith" as far as the flashy time portal façade hiding the outhouse. Along the way, the Ka Catcher team stressed the importance of focusing on the time and place once inside The Time Portal.
“It’s sort of like what Dorothy did when she clicked her heels together three times,” Micah said. “’There’s no place like home. There’s no place like home.’ And that’s where she ended up.”
“What?” Mr. Smith asked. “Who is this Dorothy?”
“Never mind,” April said. “You just think about southern Turkey and goat herding twelve-thousand years ago.”
Micah unlocked the façade door, and he and Mr. Smith entered.
“Bon voyage, Mr. Smith,” April called out. “Have a good trip.”
She waited outside but heard him gasp and say, “Is this some sort of joke?” Yep, Micah must be leading him into the outhouse.
After a few minutes, Micah joined April.
“He’s on his way,” he told her.
“How long before I can go on my Day Trip?” She’d decided her destination would be Tintagel Castle in fifth-century Cornwall, England. She didn’t expect to find the Round Table or Holy Grail, but she wanted to see if there really was a King Arthur and Merlin.
“Beats me. Now’s as good a time as any, I guess.”
They entered through the façade, but Micah stopped at the outhouse door. “You’re on your own from here.”
April took a deep breath and approached the door.
“Wait!” Micah reached out, touching her arm. “Maybe you should take out your contacts first. Gonna be in there for a while.”
She popped out the designer star lenses, placed them in a small carrying case, and dropped it in her pocket.
Giving him a hug, she stepped inside the outhouse.

* * *
April barely had time to notice Mr. Smith slumped against the inner outhouse wall, or the sign on the inside door, reading, “This Way Out,” before she found herself curled up next to a large, craggy rock on a grassy hill.
The first sound she heard was the nearby bleating of goats.
Still a little disoriented, she stood and turned in circles for signs of a castle. But as far as she could see there was nothing but rolling hills dotted with grazing goats. She trotted up a knoll to get a better of idea of how close she was to the coast of the Celtic Sea.
No water in sight.
“Shit!”
She looked down at her clothing. Clearly a man’s, but instead of the fifth-century linen or woolen garb she expected, her clothing more resembled a shift dress of crude animal skins. This didn’t look like Arthur’s Cornwall, or even Dorothy’s Kansas.
Her destination looked a lot more like southern Turkey twelve-thousand years ago.
But if that were so, where was Mr. Smith?
From her knoll, she saw a disturbance in the herd. All the animals moved away from one particular goat, which looked at her and started bleating.
“Uh-oh.”
The unpopular goat started up the knoll, running toward her. At the moment it rounded a craggy outcropping, a large spotted leopard leaped from one of the rocks and took down the goat with a single swipe. She watched in horror as the cat settled over the carcass to devour its prey.

* * *
Micah sat in a folding chair situated just outside the outhouse. He unscrewed his thermos and took a swig of coffee to wash down the donut. He figured this part of his job would be the most boring. The waiting. At least he’d remembered to bring a book.
He still worried about two people taking Day Trips at the same time. Initially, Buford had proposed they offer multiple-party trips, but he and April had talked him out of it. They certainly hadn’t worked through the consequences, and here they’d tried it on the spur of the moment anyway. He thought back to April’s argument about her own trip. What could go wrong?  Chances were, nothing, but it still made him uncomfortable.
He sure wouldn’t want anything bad to happen to her. Yeah, she was bossy, but easier to talk to than prim little Puritan Sarah when he'd time-traveled to 17th-Century New England. April had even stood up for him when Buford had tried to short them on pay. Sarah hadn’t defended him when her father marched him to the stocks. And April sure looked great in that Cleopatra outfit – a real improvement over a gray Puritan dress and bonnet.
April was beautiful, confident, clever – and she lived in the twenty-first century. Of course, she wore lizard lenses and lied for effect. He’d never met anybody so eccentric, but that made her all the more interesting. And despite their rocky introduction, they’d become comrades-in-arms against a world created by Buford Price. Micah even found himself imagining the two of them as a couple.
He laughed out loud. No girls ever liked spending time with him. Still, was it possible she might one day see more in him than just a coworker? Only one way to find out: He’d take the plunge, invite her to a movie or out to coffee.
Pushing into the chair to find a more comfortable position, he leaned back and daydreamed about a future with someone as complicated as April.
An hour later, the outhouse door blew open and the woman of his dreams stumbled out.
“Micah!” she gasped.
“That was quick.” He moved over to help steady her. “How come you’re back so soon?”
Breathing hard, she rasped, “Mr. Smith …”
“He back already, too?” He looked toward the outhouse.
“That’s what I’m trying to tell you. Mr. Smith isn’t coming back.”

* * *
Street date for The Magicke Outhouse is late this year.
Posted by Kym-n-Mark Todd at 9:06 AM 7 comments: