Generally, we prefer daytime investigations -- too easy for the imagination to get away from us at night! But somehow a midnight session seemed the best approach when we decided to investigate Boot Hill cemetery overlooking the very haunted frontier mining town of Virginia City, MT. 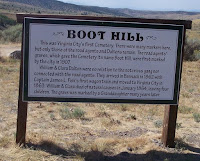 The most prominent graves at the site are those of five road agents lynched by the Montana Vigilantes in 1864, marking the end of a lawless spree of road heists and some one hundred murders in the area during the Montana Gold Rush.

We began the investigation earlier in the evening by taking the local ghost walk, which led us down the main and dark side streets to see numerous homes and buildings said to house the restless spirits of many former residents.

Along the way, the tour guide took us inside the Hanging Building, where a heavy beam still shows the marks of ropes used to lynch desperadoes who had terrorized the region, notably by nearby Bannack sheriff Henry Plummer's gang. The town of Bannack had hired Plummer to enforce law in the mining towns, little realizing Plummer was the brains behind a string of stage-coach hold-ups and multiple murders along the routes among the territory's communities.

On January 14, 1864, the Vigilance Committee arrested five road agents living in Virginia City -- Frank Parish, Boone Helm, Hayes Lyons, Jack Gallagher, and George "Clubfoot" Lane -- and summarily hanged them. (We had earlier visited the historical museum in the first floor of the local library, where a jar contains George Lane's severed clubfoot.) Their remains -- minus the foot! -- were interred on Boot Hill, but their spirits are said to still haunt the graveyard.

We wanted to find out.

Boot Hill overlooks the town in the narrow river valley below, and we waited until the local main street saloon -- okay, the local bar -- quietened down. Then we set up our equipment in front of the graves of the five vigilante-hung road agents.

The Wraiths team that night consisted of three members: Kym ran the camcorder while Fonda took a sequence of still photos at five-second intervals during the investigation; meanwhile, Mark conducted both audio-only digital recordings followed by a session using the ghost box.

We were not disappointed by the results.

When Mark asked if anyone was trapped at the cemetery, a series of Class A EVP responded, "He's trapped ... I am ... desperate." But that was only part of the remarkable responses we captured:


Class A EVP at Boot Hill

On the above video, you can hear a number of additional responses to our questions that we don't draw attention to in this clip. Listen for a man's voice that tells us to "Leave" as well as the word "Dead" repeated multiple times by different voices. What struck us most strongly, however, was how many of the EVP seemed clear answers to questions we asked, leading us to believe we captured not only residual but also intelligent hauntings.

At the end of the video, we include two of the many intriguing still photos captured during the investigation. Although we are always skeptical about the source of orbs, we nonetheless find it hard to dismiss them all in this instance since Fonda took photos at consistent and methodical five-second intervals. The orbs she captured appear intermittently on the stills, sometimes as many as thirty or more in a single frame followed by a frame absent of any. If these were reflections caused by dust or insects, we would expect a gradual lessening of the orbs rather than a sudden absence altogether between frames.

The cemetery inquiry was a satisfying end to our two-day investigation at Virginia City, and we're still examining our evidence. The very kind and helpful locals invited us to return anytime we liked.

We have a feeling we'll be back.

We're still having as much fun analyzing the results of our ongoing investigations as we did conducting the investigations over the past year for our book, WILD WEST GHOSTS.

There are puzzling experiences and encounters aplenty out there, and you just may want to pick up a copy of the book for either your own armchair musings or else as a guide for some of your own expeditions into the fascinating world of the paranormal.

You can buy the book as either an e-read or a trade paperback. Visit our Website for the links.

In the meantime, happy hunting!
Posted by Kym-n-Mark Todd at 10:04 PM No comments:

Countdown for Halloween - our upcoming para talks in October

Halloween must be coming. We've had nine requests in October to bring our slideshow about the paranormal research we did for WILD WEST GHOSTS. 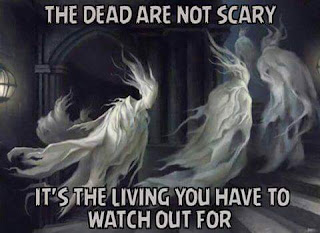 Of course, we're delighted. And we've prepared a combination of audio and video clips that document our various investigations, including EVP captures (EVP stands for Electronic Voice Phenomena, a theory that ghosts can manipulate electronic instruments to produce verbal communications), flashlight interactions, swirling angry orbs, and a whole slew of other experiences.Who knew Colorado was so haunted!

Some of the venue requests are special-interest or private-party events, but plenty are free and open to the public. If you're in the vicinity and free, we'd love to see you there!

The Halloween countdown is on!

(And watch for the forthcoming article about our investigation on Oct. 3 at the Old Rock Community Library.)

We're still having as much fun analyzing the results of our ongoing investigations as we did conducting the investigations over the past year for our book, WILD WEST GHOSTS.

There are puzzling experiences and encounters aplenty out there, and you just may want to pick up a copy of the book for either your own armchair musings or else as a guide for some of your own expeditions into the fascinating world of the paranormal.

You can buy the book as either an e-read or a trade paperback. Visit our Website for the links.

In the meantime, happy hunting!
Posted by Kym-n-Mark Todd at 11:30 PM No comments: