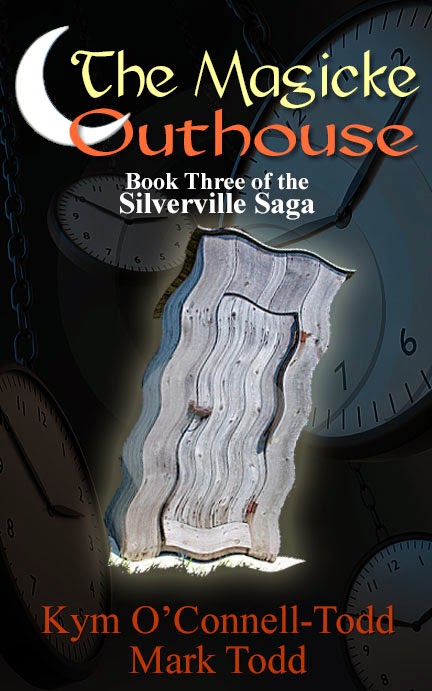 Book Three of the Silverville Saga is forthcoming from Raspberry Creek Books in November 2013.

Here's what our back-cover reviewers/blurbs have to say about THE MAGICKE OUTHOUSE.


“A unique cast of characters makes this a fun and enjoyable read!” – Alex J. Cavanaugh, author of the Amazon Bestselling Cassa series

“This rollicking story keeps the reader captivated until the last, surprising chapter. Who would have thought that a journey that begins in an outhouse could be so much fun?!” – Charlie Craig, showrunner/head writer for SyFi Channel’s hit series Eureka and writer for Fox’s The X-Files


“Mystery, adventure, exotic locations – Kym and Mark Todd have a time-travel hit with this new adventure in the Silverville Saga series. As soon as those deadly kinks are worked out, sign me up.” – Stacia Deutsch, NYT Bestselling author


Below is an excerpt from the novel, featuring a scene from one of our new fave characters, April Schauers: