Write in the Thick takes on the X-Files

Our lives are starting to feel like episodes of the X-Files -- minus the guns. 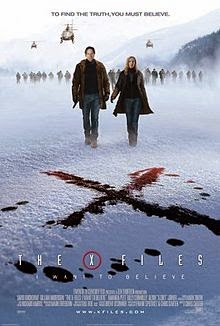 It all started with our investigations into UFOs as research for the first book in the Silverville Saga, Little Greed Men. Like any serious writers, we jumped into that research with a vengeance, taking the training and becoming field investigators for MUFON to see firsthand what motivates people to believe.

It quickly became apparent that the roles we assumed even mimicked Mulder and Scully. Mark definitely fit the bill for an "I Want to Believe" investigator, while Kym maintained the distance of a rational skeptic. In the 35 or so field investigations we've now conducted, we've come across our share of the inexplicable as well as the expected stonewalling by assorted government officials (who were nonetheless polite if not exactly helpful, we might add).

But we've also we've been able to determine less-than-extraterrestrial solutions for most of the sightings and encounters we looked into: weather balloons, mis-ID'd stars or meteors, sightings of the International Space Station, etc. Definitely the sorts of explanations that wouldn't have made for compelling X-Files episodes.

Over the past couple of years, we've nonetheless interviewed folks who make extraordinary claims and even some who produce intriguing (though not conclusive) evidence for events that defy rationale explanation.

All of these activities have tended to move Mark closer toward Scully and Kym not as far from Mulder . Let's just say we're now both optimistic skeptics.

So it comes as little surprise to us that our latest writing project, which is all about hauntings, has plunged us into a whole other realm of the paranormal. It began as research into the fourth book for the Silverville Saga series, but now it's taken on a life of its own, and its own "nonfiction" book.

And we feel like we're back in the X-Files once again.

We've decided to use our blog for this WIP to report excerpts from our findings and experiences as we research and investigate. Why not share the fun and the perplexing?