When the Other Side contacts YOU! 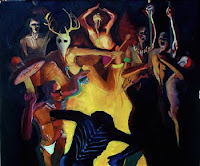 When we started trying to contact the Other Side, we didn't realize some of "them" would start initiating contact with us!

The past year of paranormal investigations has become a paradigm-shifter for us, given the wide range of encounters we've experienced and the considerable evidence we've collected. But we've also had a number of interactions we didn't expect. Some of these more startling encounters have occurred through ITC (Instrumental TransCommunication), others through less conventional means.

Some interactions occurred during research for WILD WEST GHOSTS while others have developed since the publication of the book.

Our first inkling we weren't entirely in control of our investigations began when entities started referring to us by our first names. (These instances began -- but continued -- before other researchers suggested we use the protocol of introducing ourselves at the start of all our sessions.)


How do they know?

These interactions tended to startle us at first, but by no means did they freak us out. In fact, we got used to the salutations. However, we should have realized they -- whoever "they" are -- know more about us than we know about them. Are we an open book, or do they have "notes" and somebody forgot to copy us in? Either way, it's clear that many times entities are fully aware of who we are and what we're doing even at the onset of an investigation.

In fact, sometimes they seem to know about us even before we arrive! Read on.

When Hotchkiss Paranormal Investigators (HPI) invited us to team up with them for an investigation in Cripple Creek, Colo., the group had already arranged for an overnight lock-down in the Outlaws and Lawmen Jail Museum. We knew the facility was reputed to be the residence for a nasty entity known as "Joe," a pedophile who had died while incarcerated there. We decided the opportunity could up our game with a different sort of paranormal activity than our haunted hotel experiences had provided.

When we arrived, we were psyched to spend time in the confinement cell where Joe seems to be at his nastiest. But our first watch turned out to be on the third floor of the building, which to our surprise had also served as a sort of part-time orphanage.

We saw pictures on that third floor of the matron in charge of the children, an African-American woman named Amy. We managed to conduct successful interactions with her through both our ghost box and a flashlight session. (See our article on that investigation here.) 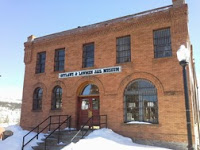 Then Kym decided to visit the orphanage section of the facility and to invite any child spirits to play with her in their bunk-bed room. Nothing seemed to come of her invitation, and she felt sad for them and hoped they were well.

A couple of days after we returned home, we shared the particulars of the investigation with our daughter. She told us she'd had a dream the night before we left for Cripple Creek in which an African-American woman sat at our daughter's kitchen table and told her the children were looking forward to our visit.

She thought nothing of the dream -- until we told her about the unexpected use of the jail we discovered once we arrived.

In some sense, the spirits seemed to know we were coming, even though *we* didn't know why we were (really) coming! Even more peculiar was how they knew in advance and clearly understood we would be part of the different investigative team who had made all the arrangements.

But the name-calling and the dream invitation have not been our strangest encounters, not by a long shot. What happened next has extended over several months and is still ongoing -- the subject of the next article.

We're having as much fun analyzing the results of our investigations over the past year as we did conducting those investigations for our book, WILD WEST GHOSTS.

There are puzzling experiences and encounters aplenty out there, and you just may want to pick up a copy of the book for either armchair musings of your own or else as a guide for some of your own expeditions into the fascinating world of the paranormal.

You can pick up the book as either an e-read or a trade paperback. Visit our Website for the links.

In the meantime, happy hunting!
Posted by Kym-n-Mark Todd at 4:38 PM