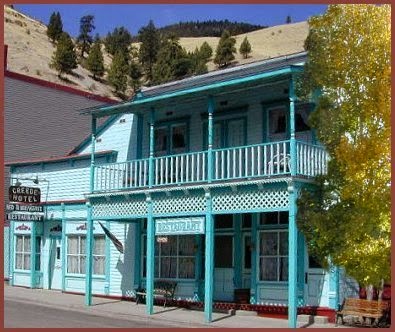 
(This is Part Two of a two-part series. If you missed our previous account of the wild history and ghostly legends for this hotel and frontier mining town, click here.)

But first a S/O to proprietor/chef David Toole and hotel manager Leslie Heller, who both welcomed us and made the whole facility available to our investigation. Thanks, you two!


Since we visited before the hotel opened for its summer season, David and Leslie left the premises and gave us the run of the place to conduct our investigation. This arrangement worked for us because that eliminated external noise and the possibility of contaminated EVPs. (EVP stands for Electronic Voice Phenomenon, an audio effect through either a digital recorder or a spirit box as a means for ghosts to communicate.)

They recommended the Calamity Jane Room and the Poker Alice Room – the two guestrooms with the most reported paranormal activity. We headed up the narrow staircase and started with an EMF sweep of these two rooms and the hallway. (EMF stands for Electromagnetic Field, and EM field strengths may indicate ghosts are present or trying to communicate.) At the mouth of the stairwell, the meter showed 380mG and climbed to a steady 460mG near the bathroom at the other end of the hall. The EM field in the Calamity Jane Room registered 400mG on the east side, 530 over the bed, and mid 600s by the balcony. These readings were our baseline measurements to compare against any anomalies.

We set up our camcorder, digital recorder, flashlight, and spirit box to start our first session.  We introduced ourselves, explained our equipment to any invisible presences, and invited them to speak with us or manipulate the flashlight. The light remained steady throughout the time in this room, and we’d have to wait until we returned home to analyze the digital audio recordings. We observed EMF fluctuations from 530mG to 570mG while we asked for interaction.

However, the spirit box managed to produce a number of EVPs we could hear at the time. We asked if any spirits were here to talk to us and heard a quick response of “Here?” We weren’t alone in the hotel after all. So we asked again how many spirits shared the room with us and heard twice, “Eight” – standing room only. Then we queried their names. The first reply was “Myrtle.” (We would later research that name for the vicinity and found several possibilities. Myrtle was common during the era, and a number of them lived and died in Creede.) We also heard the names “Liz” and “Fes” as well as a man’s voice saying, “Death.”

An EVP conversation we captured

During our later analysis, we discovered we’d captured a woman’s voice declaring, “I think I’m going to shoot you.” That unexpected announcement followed a less intelligible statement by a man, and we think we recorded an exchange between the two of them rather than a threat aimed at us.

During the real-time session, Kym heard a voice coming from just beyond the open room door, so we checked the hallway expecting to see Leslie. No one in the hallway – at least, no one we could see since we were locked down and alone on the premises. But when we asked who was in the hall, a woman’s voice told us, “Bob.” Bob Ford? He’d died in 1892, assassinated in his nearby tent-saloon while he boarded at this establishment.

We struck camp and moved across the hall to the Poker Alice Room. On the way we noticed the slight odor of smoke – but only for a moment (a whiff of Alice’s famous stogie?) Since the building displayed a no-smoking sign, we mentioned this to David in a later follow-up interview. He told us that end of the hotel was closest to the buildings that burned when fires swept through early-day Creede. Make of that what you will.

In the Poker Alice Room, we followed the same routine for the next session. We recorded 500mG throughout the room and 550mG over the bed (metal bed springs may have elevated these stable readings.)

Again, no interaction with the flashlight. But the spirit box captured multiple names and phrases. Most intriguing was “Alice” – given the room bore her name, and we know she boarded in this facility. We also recorded the name “David” and the word “Brave.” Other phrases proved more perplexing, including some clear and some garbled words but each delivered by separate voices. One asked the question, “You have the two (boys?)?” Another proclaimed, “Bless you,” and still another said, “Come to (me?).”

We decided to run an experiment on the dresser where a spirit had knocked over seven consecutive glasses. We set up two coffee mugs near the edge and invited the spirit to repeat the event. After ten minutes, the mugs remained in place. In later analysis, we discovered on the digital audio recording a response to our question, “Did you knock the glasses over?” (in front of the former guest). The immediate answer was a whispered “Yes.”

All we needed to crown our investigation. Audio-only EVPs are some of the most convincing types of evidence ghost hunters capture.

* * *
In the next article, we share the history and ghostly legends surrounding the Bross Hotel in Paonia, CO, where we witnessed a fanny print on a freshly made bed  -- a common paranormal occurrence reported by others as well in this very haunted B&B.