We're sharing the history and haunted legends associated with each of the hotels and B&Bs in our book forthcoming in early June,

This week, we feature the Spruce Lodge in South Fork, Colo. (If you missed the earlier account of our own paranormal investigation at the Spruce, click here.)


* * *
Historical Context
As early as 1874, South Fork was a stop along the Rio Grande for the Barlow and Sanderson Stage Company’s route, carrying passengers headed to more northerly destinations following the Old Spanish Trail. By 1881, the Denver & Rio Grande Railroad laid tracks through the town on its way to silver mining areas in the mountains further west. The narrow gauge trains served the local emerging sawmill industry in South Fork, and soon sheep and cattle operations as well as farming developed in the Rio Grande valley surrounding the town. 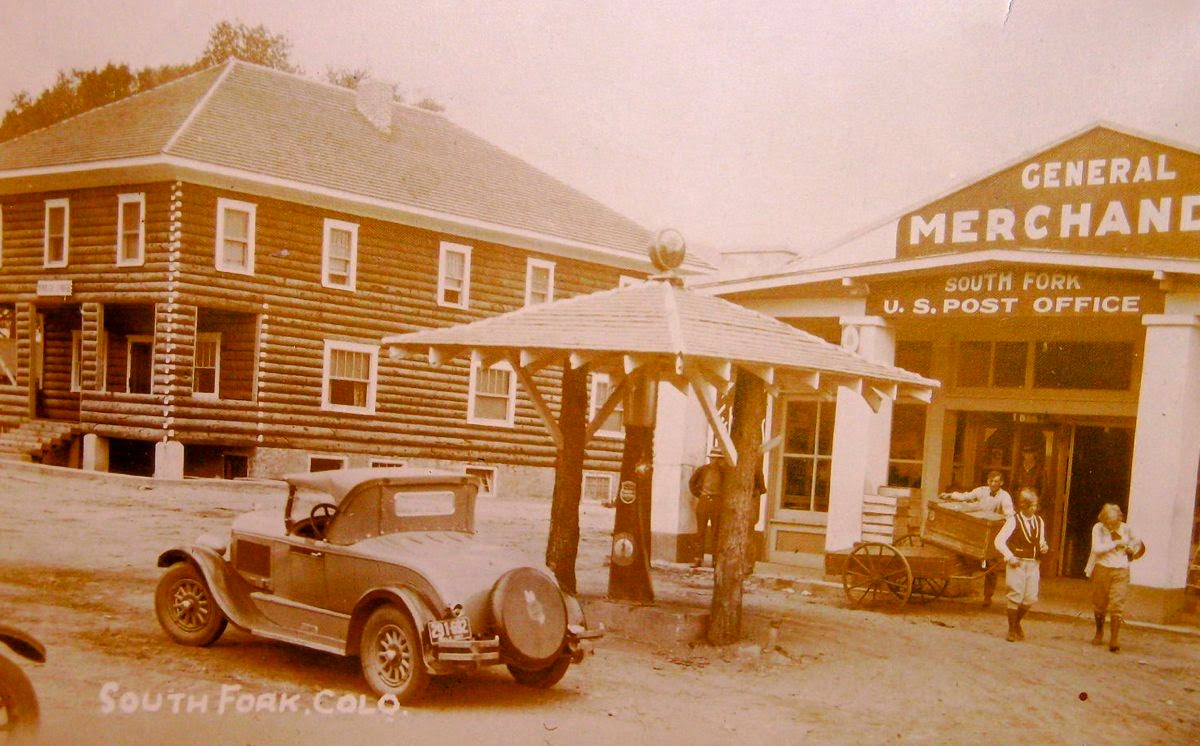 The Galbreath Tie & Timber Company, which began in the 1880s, built what would become the Spruce
Lodge’s main two-story log structure in the 1920s. The building served as a boarding house for sawmill workers and, except for the hardwood floors, all the wood in the construction comes from locally harvested forests. That mill continued operation until 1999 in what’s now a vacant lot across the highway directly south of the lodge.

The Spruce later passed into private hands and became a public lodge. It appears on the National Register of Historic Places, administered by the National Park Service as a way to coordinate and protect sites with historic and cultural significance.

Although one of the oldest communities in Colorado, South Fork didn’t become an incorporated town until 1992, making it the “youngest” statutory town in the state.

Rob and Dee Plucinski have owned and operated the Spruce Lodge since April 2006.

Legends, Stories, and Guest Experiences
The original two-story log building provides the setting for paranormal activity at the lodge, and reports occur in virtually every room of both the main floors and the basement – day and night.

Even before current owners Rob and Dee took possession of the lodge, the previous owners made it clear to expect paranormal events regularly on the premises. Although skeptical at first, the new owners soon discovered for themselves just how haunted their lodge was, and at all hours. In fact, so much paranormal activity has been reported by the owners, staff, guests, visiting friends and family, and construction workers, we can’t mention it all in this article.

Below is a summary, with a few particularly intriguing events in more detail.

Plenty of footsteps – sometimes for as long as ten or fifteen minutes at a time – occur throughout the building and even within guestrooms while occupied. Owners and visitors frequently hear voices, groans, sighs, and whispers throughout the main lodge. On separate occasions, owner Rob distinctly heard the same woman whisper in his ear, “Look at me” and “Hello.” A couple reported hearing Indian drumming in the hallway outside their room, and a plumber working in the basement heard a voice over his shoulder ask, “What are you doing?” while he worked alone. He didn't stick around long enough to carry on further conversation.

The owner’s pets have frequently responded to unseen presences as well.

Apparitions also manifest on the premises. Guests have reported seeing shadow figures dart from room to room or down the second-floor hallway. One building renovator observed a basketball-sized winged object fly out of one room across the hall and into another. No windows were open at the time.

Coming out of the laundry room, Rob noticed a dark figure standing in the doorway to the kitchen, very much resembling a previous deceased owner. He also came face to face with a blonde woman wearing a teal-colored shirt and blue pants sitting on a pool table in the building’s basement. There is no pool table in that particular space, but the room did serve as a pool hall in years past. According to Rob, she didn’t seem surprised to see him.

Dee had her own encounter with an apparition early one morning:  “I reluctantly got out of bed and walked past Rob who was still standing by the alarm clock. I walked into the bathroom and was very surprised to find him in there – not in the bedroom where I [thought I] had just seen and spoken to him.”

Even the owners’ children have witnessed ghostly guests. Their son at age three pointed to an upstairs window, asking, “Who dat girl?” The parents saw nothing. Five months later, the little boy told his mother about “the other mommy” who sat on his bed, describing an older woman with white hair and glasses.

These days the owners have learned to take all the paranormal activity in stride. Guests might as well follow that example -- if they want to get any sleep.

* * *
Next week, we report on the history and ghostly stories at The Twin Lakes Inn, home to multiple hauntings, including an account of uninvited apparitions who attended a seance on the second floor.

Now only five weeks away from the publication of WILD WEST GHOSTS, where we recount more on this and thirteen other haunted locales.
Posted by Kym-n-Mark Todd at 10:38 PM