Between now and late spring, we're sharing the history and haunted legends associated with each of the hotels and B&Bs included in our forthcoming book, 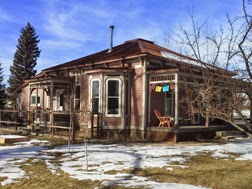 This week, we feature the Vintage Inn in Gunnison, Colo. (If you missed -- or want to revisit -- the paranormal investigation we conducted at this hotel, you can click here, as well as watch YouTube clips from our actual investigation.)


This article is a departure from our earlier accounts in the series in that our findings suggest more of a haunted person rather than haunted hotel! Read on.


The Gunnison Valley served as seasonal habitation for Ute tribes for centuries, for trappers and mountain men in the early 1700s, and for exploratory transcontinental railroad routes in the early 1850s. The region began to see permanent residents during the 1870s when miners started staking and working claims.

Topographers began mapping the Gunnison Country in 1874, and the town of Gunnison took shape and grew into a supply center by the late 1870s.

Two railroads competed to reach the area, but the east and west sides of town disagreed about where to situate the depot, splitting the community into East Gunnison and West Gunnison by the time both railroads arrived in 1880. Only the Denver & Rio Grande survived for the next seventy years.

Capt. Louden Mullen, a Civil War veteran-turned-developer, championed West Gunnison’s influence and built a hotel, school, opera house, fish hatchery, and park to promote his side of town. His projects also included a church, a stone livery barn, and the foundations of an iron works that never got off the ground.

During Mullen’s time in Gunnison, he built his own house in 1883. A later article in Gunnison’s News Champion in 1945 describes the house: “There is little, but not too much of scrolled trimming, the windows are beautifully arched and chastely decorated (to use the phraseology of the 80s), the gables supported by carved cornices. The eight-room structure is topped by a distinctive iron railing. The large lawn is enclosed by a picket fence, matching the dwelling in color. It is a house which cannot fail to attract the attention of anyone interested in period architecture – a good deal less flamboyant than La Veta, [an up-scale hotel of the same local vintage] although of somewhat the same inspiration. The grandson, Elmer Mullen, says it was beautifully and lavishly furnished when the Civil War veteran had it completed.”

In the years to come, the building would pass through a number of hands, serving many times as a private residence but also at one point as a day-care facility, an antique shop, and even a video rental store.

That home eventually became the Vintage Inn B&B in 2010.

On Tomichi Avenue (Hwy 50), only a few blocks from the inn, sits Columbine Apartments, formerly the Columbine Hotel. The building’s second floor once served as a brothel in Gunnison’s frontier days, and former hotel guests as well as current residents have reported seeing the apparition of a woman – legend says she was a murdered prostitute – wandering the central hallway late at night. 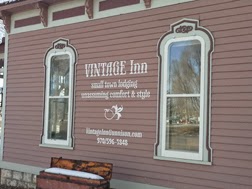 A former B&B that operated as the Mary Lawrence Inn (now a private home) also contains long-time reports of hauntings. Sitting on a residential block in the northern part of the city, this large structure became home to a prominent local family in the middle decades of the Twentieth Century. While growing up in the house, the family’s two children, now grown, told us they’d witnessed poltergeist activity on a regular basis as well as sightings of a full-bodied apparition.

And the local university has recurring reports of hauntings in at least three campus buildings. Generations of students continue to report sightings on the third floor of Roubidoux Hall of the ghost of a man who died of smoke inhalation many years ago. Some students say they’ve seen his apparition at their bedside at night. Others claim the ghost locks doors from the outside, recreating the same circumstance that trapped him during the fateful fire. Nearby Ute Hall harbors accounts of a shadow figure in the basement known to pass through the wall of an off-limits storage and boiler room, harmless if a bit unnerving to those who’ve witnessed the apparition. Additional hauntings occur in Taylor Hall, the original structure for the 1900s Normal School.

Past residents and owners of the current Vintage Inn never kept (or at least never publicly shared) accounts of haunted events on the premises. One former owner of the property, who undertook extensive renovations to the property in the 1970s, claims none of his alterations to the house provoked the sort of supernatural activity typically reported when buildings are disturbed.

He suggests that current paranormal reports may connect to the current owner herself. This could well prove true since spirits residing on the premises seem to have a strong connection to current proprietor Beth Marcue.

Our own experience at the Inn (see the full investigation here, including video clips of interaction with unseen entities) revealed the resident spirits do, indeed, have a close connection with Beth. A combination of  responses through spirit box and flashlight suggested these entities may have accompanied her to the house, attached to an antique chest of drawers from Beth's pioneer family arriving by covered wagon in the past century. If so, they were willing to talk to us as guests of the B&B, but spirits clearly preferred talking to the proprietor.

* * *
Next week, we share the history and ghostly legends of the *very* haunted Hotel Norwood, site of apparitions, cold spots, and a great deal of poltergeist activity.
Posted by Kym-n-Mark Todd at 11:25 PM