#GhostHunt No. 14 - the Vintage Inn in Gunnison, CO


Our paranormal investigation account this week takes place at the Vintage Inn B&B in Gunnison, CO.

But first a S/O to owner/proprietor Beth Marcue, who welcomed us and made her entire B&B available to our investigation. Thanks, Beth!

The Vintage Inn was originally built in 1883 by Capt. Louden Mullin, a Civil War veteran responsible for many entrepreneurial ventures in West Gunnison. (At the time, the community divided into East and West as competing factions for the arrival of the new narrow-gauge railroad and consequent location of the depot.) Through the next century, the building served as a series of private residences as well as a daycare and video store before becoming a B&B in 2010.

Unlike the other ghost hunts we've conducted, this B&B has no documented history of paranormal activity. But to be fair, it’s only been open to the public for five years. We went in on a hunch anyway because of the age and appearance.

Our intuitions proved dead on. 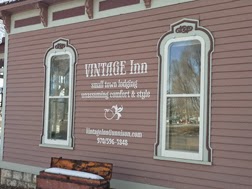 Initially, we took EMF readings in the guestroom, ranging from 450-480mG around the bed and 580-590mG throughout the rest of the room. (EMF stands for Electromagnetic Field, and ghosts are said to manipulate this energy as a way to manifest or communicate.) The kitchen hovered in the mid-420s, the hearth room in the 410s, and the front living room in the 450s.


We decided not to further investigate the guestroom because owner Beth believed it was a newer addition to the building. So instead we focused on the original structure, most of which is available to guests during their stay.

In this instance, Beth wanted to assist as a ghost-hunt team member since she, too, was curious to see what we might find. We were glad to invite her along, and she offered a number of personalized questions that made the investigation more interesting.

We began in the heart of the B&B, the hearth room, where we set up our equipment in front of the stove. Almost immediately, our EchoVox spirit box produced several EVPs using Beth’s name – fine by us. (EVP stands for Electronic Voice Phenomenon, sometimes occurring on audio recordings but can also be generated through a spirit box. Our EchoVox generates only random sounds -- no words -- and it's up to a spirit to assemble and create intelligible responses.) It was, after all, her house and her invisible roommates!

When we asked if any unseen presences could tell us who they were, we received clear replies of “no” twice. Then we asked if they had a story to tell, and we got “alright.”  But the single-syllable words that followed didn’t reveal much coherence.


So we asked how many spirits were present during the session and heard a response of “five” from two different voices. (Our EchoVox produced multiple voices while we conducted our investigation that day.) Later analysis confirmed what we’d heard in real time, but also additional references to Beth as well as the word “apple” after we asked if they had stories to tell.

Back in real time in the hearth room, we turned on the flashlight and asked for the spirits present to wink or dim the light as another way to communicate. No response. We also conducted an audio-only EVP session, which later yielded nothing.

Beth suggested we move to the front living room because, to her, that room always held a different feel. We
again set up our EchoVox, camcorder, and flashlight to see what more we could capture. Beth asked if there was anything she could do to make the spirits in the house more comfortable. That only resulted in more references to Beth. So Mark asked if they were happy in this house. Loud and clear in real time, we heard in a man’s voice say, “Happy.” Mark asked for confirmation that the spirit had said “happy” and received an immediate “yes.” In later analysis, we also captured “good” following that exchange. Audio-only, nothing.


But the spirits made their strongest showing in the living room through the flashlight, fluttering at first and then dimming twice almost to the point of winking out. We captured these two episodes on video.

We thanked them for their interaction and, on later analysis, discovered a voice saying, “You’re welcome.”

While there, Beth asked us to conduct readings in her private bedroom, where she kept a dresser that had arrived in Gunnison via her family’s covered wagon. We turned on the EchoVox and set the flashlight on the dresser. Mark asked for communication through the light, and we heard a voice through the spirit box twice say, “Flashlight.”  However, the light never winked or dimmed this time

In later analysis, we discovered several additions. Mark asked if the spirits present had any questions for Beth. A man’s voice repeated, “Question,” followed by a woman’s voice ten seconds later also saying, “Question.” The recording held Beth’s further request to blink the flashlight, but the response was “hard.” We also captured a woman’s voice announce, “Say it,” about thirty seconds later. We couldn’t determine if this spirit addressed the team or some other unseen presence.

We captured one final remark on later analysis: Mark had asked if anyone in the room had a connection to Beth’s family, and a woman’s voice replied, “I did.”

EVP of "I did" responding to Beth

We were glad we followed our intuition to investigate the Vintage Inn. Beth must be a good innkeeper as well as a good ghostkeeper. All her spirits appeared happy and polite.

* * *
Several friends and followers have asked us if we'd share more about the history and legends surrounding the hotels we investigated. It's all in the forthcoming book, of course, but we're happy to share these fascinating back stories as we anticipate the release of the book this spring.

So in coming weeks we'll share some of the history and the paranormal legends associated with the hotels we investigated. Each has its own special flavor and, certainly, its individual and unique "haunts."

BTW, Happy New Year to all our para peeps, followers, and friends!
Posted by Kym-n-Mark Todd at 8:59 AM