We're sharing the history and haunted legends associated with each of the hotels and B&Bs included in our book, which features fourteen establishments:

This week, we feature Linda Goodman's Miracle Inn (formerly Last Dollar Inn)  in Cripple Creek, Colo. (If you missed -- or want to revisit -- the paranormal investigation we conducted at this hotel, you can click here, as well as watch YouTube clips from our actual investigation.)

Linda Goodman's Miracle Inn consists of two structures -- an 1890s brownstone and a reconstructed Victorian-style boarding house -- even though it's not readily apparent from the outside that both buildings comprise a single inn. But experiencing the oft-reported hauntings within the original brownstone on the western end seems like a bonus when staying at this posh and elegant B&B.

Historical Context
Cripple Creek's 1800s history began as a cattle pasture before Bob Womack discovered an ore deposit in 1890 and sparked the last great Colorado Gold Rush. Soon after, prospectors flooded the region, increasing the population from 500 to 10,000 people in three years.

In 1896, three successive fires destroyed most of the city. Resourceful citizens rebuilt Cripple Creek over the next few months, and many of the historic buildings still in existence date back to that renovation.

These days, only a few small mines still operate. The real gold comes from local gambling casinos, legalized
in 1991, and they now occupy many of the historic buildings.


Shortly after the 1896 fires, a new city ordinance required builders to use brick. A gentleman from the East Coast moved to town and built what would later become Linda Goodman’s Miracle Inn. He modeled his new home after the brownstone style he was used to and erected it next door to a boarding house.

In the decades that followed, the inn also became a boarding house, a bookkeeping office, and a private residence. Legend holds that ladies of the night operated out of the guestrooms.  Even Nicola Tesla reportedly stayed there during his Colorado electrical experiments.

During the 1960s, author Leland Feitz summered in the house. After meeting astrologist/author Linda Goodman (Sun Signs) at a book signing, he invited her to Cripple Creek. Soon after, she rented the house and eventually bought it, adding her own touches, including the large stained glass window of St. Francis of Assisi. 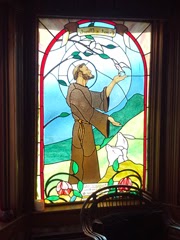 Rick and Janice Woods bought the building in the 1990s. They also purchased the neighboring boarding house, reconstructing it in a Victorian style and adjoining it to the brownstone to open the Last Dollar Inn.

Jason Barton and Sofia Balas purchased the historic inn in 2013, in the eleventh hour before the building faced auction and an uncertain future.

They’ve kept much of the décor of the original house intact, including many of Goodman’s antiques and memorabilia. The B&B’s guestrooms are dedicated to various former residents as well as to notorious Cripple Creek madam Pearl DeVere.

Legends, Stories, and Guest Experiences
The house has a long-time reputation for hauntings, and this feature attracts a number of its guests.

A psychic told Jason and Sofia the basement of the brownstone contains a spirit portal. If this is true, the ghosts certainly don’t stay downstairs.

Even before the couple purchased the B&B, they experienced paranormal activity during a vacation stay. Opting for the Linda Goodman Room, they witnessed the door open and slam by itself (in the absence of any draft). Sofia saw a picture in the bathroom shift on its own and move.

They also heard someone sitting in a wicker chair and sensed a presence standing by their bed watching them. More impressive, they observed a shadow walk past their door. In the Womack Room, Sofia witnessed a shadow apparition pass through the closed closet door.

Other guests report footsteps in the hallway, and a number have experienced their hair pulled from behind. One previous inn owner felt an unseen presence pat the top of his head while he leaned over the bed in the Linda Goodman Room. That owner also reported the door to the Feitz Room mysteriously closing and locking on its own (an action that takes manual locking).

According to an article in the Pikes Peak Courier, some guests have heard a “phantom train” while staying in the Feitz and DeVere rooms; a child ghost has appeared at the desk in one of the rooms, and the apparition of a train conductor has shown up in the living room.

Sofia has often felt a cold spot move through her while serving breakfast, an activity that often happens while she sits at the table. Guests have also noted the moving cold spot in the dining room.

Even if the spirit portal basement is off limits to the public, paranormal interactions at the ground level and on the second floor in the original building abound for the more adventurous and ghost-seeking guest.

* * *
In the next article, we share history and ghostly stories for Del Norte's Windsor Hotel, where a tragic early-day suicide still haunts the premises.
Posted by Kym-n-Mark Todd at 9:13 AM