#GhostHunt No. 2: the historic Fairplay Hotel

The third investigation for the latest book, our paranormal "nonfiction" on haunted hotels in mountainous Colorado, took place at the Fairplay Hotel in South Park.

And a shout-out to all the gracious staff (esp. Megan, Beth, Julie, and Sara) and the willingness of hotel owner Lorna Arnold, who opened up the entire hotel to our visit.

Hotel consultant Steve Lake described the current hotel as "much improved and improving." But the place retains the look and charm of a hundred-year-old building, including the installment of the original Silverheels brothel/saloon bar from the nearby 1870s ghost town of Alma (and including original bullet holes from that rowdier era).

More important to us, the Fairplay Hotel retains evidence of several persistent "residents."

And most notable of these is "Julia," a soiled dove who lived and died on the premises. Some say she died violently, perhaps even by her own hand. Staff reports she still nonetheless dances in the hallways at night.

Lucky for us, the hotel let us set up in her old, ahem, haunts -- Room 205. In fact, Julia seemed to insist: the night before we arrived, the key to her room disappeared and the front desk couldn't rent the room out. Guess she was waiting for us.

In 205, we used our array of ghosthunting gizmos to see if we could establish her presence -- Spirit Box, EMF meter, an EVP session, and video camera footage.

The Spirit Box recorded multiple words that described the room as well as our various activities ("room," "bed," "shower" -- the 205 suite included that modern convenience -- as well as "videotape," while we recorded). We also got two instances of "knife" -- a reference to how she died?

Once we had a baseline EMF reading, Kym's meter spiked multiple times on the northern of the two beds and even the chair between the beds, suggesting goings-on we couldn't see. And when we afterwards analyzed our voice recordings, in which we invited her to talk to us during the EMF sessions, we found a whispered response: "I don't want to talk to you."

If only we'd known! 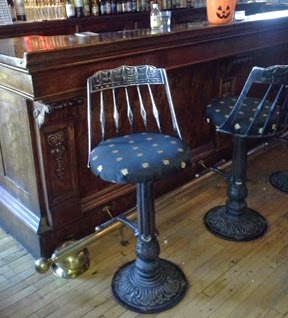 Julia is not the only resident ghost. Lorna showed us a stool in the bar which came from the Alma saloon. She said they placed a half-full glass of beer on the bar in front of the stool and invited the Silverheels madam who'd owned the relocated furnishings to drink up in welcome to the new digs. Then they locked the doors for the night.

Next morning, they found the glass empty and the stool turned around.

Staff report many other goings-on -- mostly playful, if sometimes disruptive to work -- as do many of the guests who stay at the hotel.

But you'll have to wait for the book to get the full report!

Oh, one more encounter: Kym *almost* saw her first ghost! Staffer Beth told us just a couple nights earlier she'd seen the apparition of an old-time cowboy just outside the bar. When we had lunch in the adjoining dining room during our visit, Kym saw a cowboy through the lace windows who seemed to disappear. No such luck: he turned out to be flesh-n-blood and took a turn toward a bar stool she couldn't see through the lace. Maybe next time.

In the next three weeks, we'll visit five other haunted establishments, reporting on each as we work our way across mountainous Colorado.

Feel free to "join us" for our on-site investigations, when we live-tweet what we encounter as we encounter (and with pics) on our Twitter page @writeinthethick.