Welcome to the Insecure Writer's Support Group blog hop, hosted by our incomparable Ninja Captain, Alex J. Cavanaugh (thanks, Cap'n!), hop postings shared on the first Wednesday of every month:

Many of our blog friends know I make my living as a writing teacher. Part of that job description consists of sharing with students a list of what *not* to do, and usually drawn from the annals of what I've done wrong along the way. It's a long list.

One I've yet to share with students is how I didn't get my first book published.

At the time, I already had several years under my belt as a newspaper staff writer, learning to write to deadline and to column-inch length. I'd also had some success doing spec articles for magazines. But what I really wanted was to try my hand at a longer work.

The result was a memoir about my growing up in a family mortuary business and then working for 13 years (yes, I know, an ironic number) as a reluctant mortician after my dad had a heart attack. Wait, there's more: the book was a dark comedy à la Six Feet Under -- still popular at the time but nearing the end of its first-run seasons.

I'd spent a couple years teaching students how to write an engaging query letter, and here was my chance to do instead of just teach. So I wrote this killer query and fired off my first volley of letters to ten targeted agents, all the while researching and preparing a second volley of queries.

Imagine my surprise when seven of the first ten agents requested the manuscript. Huh, guess I'd been giving
my students the right stuff after all. And I began to worry which agent I should accept.

Turned out, no worry there. One by one, they each sent their regrets over the next six months while nonetheless wishing me success. With some else. 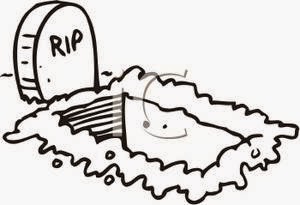 Okay, here comes the cautionary tale part: I had a good idea, the timing was right, and most of the agents told me they liked my writing style. But each in their own way -- sometimes with finesse, sometimes ... not so much -- told me the ms wasn't ready. It needed more shape, they told me, more arc, more of a controlling theme. It read like an unrelated series of anecdotes when there was clearly a larger story.

In a phrase, it wasn't ready to submit.

Crestfallen, I put the ms in a drawer, where it rightly sat for almost ten years. And I've tried never to make the same mistake:


Don't send out that ms unless you know it's really, really, really, REALLY ready. Getting in the door is hard enough and, if you're lucky enough to get an invitation to go inside, try to make sure you're bearing gifts that let you stay.


There might be a silver lining, as it turns out. Last year, and five published books later, I had an editor ask me if I had anything he might look at. At first, I said nothing (really, really, really) ready. Then I told him I had a project I'd set aside but wanted to revisit. When I told him about the mortuary memoir, he invited me to send it his way when I thought it was worth looking at. I pulled out the ms again, spent several months revising and shaping (those agents were right, and on every count), and then sent it on.

Don't know the outcome yet, and probably won't until the end of this year.

And if that project never makes it into print, at least it still makes a great cautionary tale to share with my students.