We knew that Taylor Hall Auditorium was haunted -- too many first-person accounts of paranormal activity to be otherwise.

But our prelim sweep of the building a few months back confirmed we had to find out more. And that's why we invited Hotchkiss Paranormal Investigators (HPI) to join us -- more boots on the ground and more para tech to document what was going on.

Team Wraiths and Team HPI broke into three commingled teams, giving each team the opportunity to rotate and spend an hour at each of the three paranormal hot spots we had identified during our prelim investigation. By the time we all compared notes at the end of the night, everyone walked away convinced the Auditorium was the (haunted) heart of Taylor Hall.


The Taylor Auditorium Investigation
The first team in the Auditorium encountered a shadow figure even before they could set up. (See the earlier prelim account for stories involving earlier sightings of a shadow figure in the Auditorium.) It appeared near the south stairs leading onto the main stage. And they soon saw a second figure, this time near the north steps leading to the stage. Chris from Wraiths captured on film a bluish orb near the location of the (second?) shadow figure. The team also noted two unconfirmed cold spots in the north backstage wings but concluded these might be the result of uneven heat distribution in this large space. 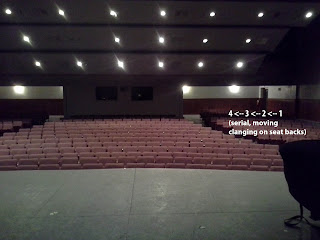 The second team, arriving an hour later, began setting up recorders and mapping the Auditorium with thermal imagers. That's when they heard scuffing steps (like the sound made on carpet) that traveled behind the curtains at one end of the proscenium stage. Team members found the carpet, but nothing or no one else. They then heard footsteps at the other end on the wooden part of the stage. The rest of the team was accounted for at the time. Who was this" The team requested some form of communication and next heard sequential rapping on a series of metal-backed theater seats. 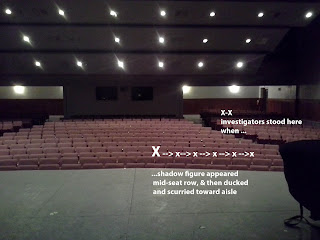 When the team went to investigate, they saw a shadow figure standing almost front-row-center below the stage. The figure ducked and scrambled back toward the north aisle. Team members raced down the aisle to meet it, but by the time they arrived adjacent to the row, the figure had disappeared.

By then, their camera started malfunctioning anyway. (It worked perfectly as soon as they left the Auditorium, of course!)

The third team conducted the final phase in the theater space and set up a full-spectrum camera pointed in the vicinity of the earlier rapping noises from the auditorium seats. The following video clip captures anomalous light sources in that vicinity.

While it's possible that these lights are environmental contaminants lit by infrared lighting, their anomalous presence is consistent with the location of the observations made by the previous team. This vid footage is inconclusive, but interesting as a correlating finding.

Although two consecutive teams separately witnessed one (or more?) shadow figures in the theater space, it seems this entity or entities weren't willing to pose for close-ups. But the multiple sightings during the investigation, together with the orb-capture, vid lights capture, and anomalous sounds -- all occurring in the same portion of the theater -- seem to add collaborative weight that something is, indeed, going on in the Auditorium.

When we packed up our gear around 3 a.m., one HPI team member, who is a sensitive, said she felt a presence escorting us down the hallway as we headed for the exit.

Both the Wraiths and HPI teams were ready to get some sleep, but no one felt like the time had been wasted in Taylor Hall that night.

Be sure to check out our new Facebook page, fb.com/WraithsintheThick, for updates on our ongoing investigations.

We're still having as much fun documenting current and ongoing investigations as we did conducting the investigations for our book, WILD WEST GHOSTS.

There are puzzling experiences and encounters aplenty out there, and you just may want to pick up a copy of that book for either armchair musings or else as a guide for your own expeditions into the fascinating world of the paranormal.

You can buy the book as either an e-read or a trade paperback. Visit our Website for links.

In the meantime, happy hunting!
Posted by Kym-n-Mark Todd at 12:31 PM