The 114-year-old Taylor Hall on the campus of Western State Colorado University in Gunnison, Colo., has a multi-generational tradition of paranormal goings-on.

(If you missed Part 1 of this investigation, click here.)

But perhaps the most persistent accounts center around Taylor Auditorium, which occupies much of the space inside Central Hall -- the final center addition to the three-part Taylor complex, completed in the 1930s.

That Auditorium can house over 800 attendees and has a full stage with a thrust proscenium. and a warren of passageways and connected rooms.

Our collected interviews uncovered recurring reports of shadow figures and mischievous pranks both in the larger auditorium and backstage.

We collected one story about a janitor who, in the early days of theater operation, had fallen to his death from the catwalk, housed some 50 or 60 feet above the main stage. So far, we haven't been able to confirm this story, but it may explain some of the activity staff and students related.

One alum shared with us an event from the early 2000s, when she and two other students were painting sets on stage after midnight. They saw a shadow figure pass across the light booth window (no one else was in the building) and then the lights flickered off. At the same time, they both felt a sudden drop in temperature as though someone had opened all the outside doors. They decided it was time to leave -- and watched as the main doors opened for them. When they darted out, the door slammed shut behind them.

Another account we collected was from a long-time theater prof who told us he was working late one night in his nearby office and heard a racket in the theater. Like the previous account, he was alone in the building at the time -- or so he thought. He found the main corridor theater doors locked but opened them anyway and went in to find all the stage lights inexplicably on. He checked the small locked light booth and found it empty, and then entered the main Auditorium again to call out if anyone was there. At that moment, all the lights went out (which could only be performed from the "empty" light booth.)

We couldn't wait to explore the Auditorium for ourselves.

While Wraiths team members Kym and Chris explored the main stage and theater seating, taking EMF readings and a series of pics, the rest of the group headed backstage beneath the catwalk to conduct both audio-only and ghost box EVP sessions.

Chris captured on camera several orb-like anomalies near the north wall of the theater seating, and then the two joined the rest of the team for the EVP sessions. Although we recorded nothing through the digital recorder, we did manage to record what seemed like intelligent responses with our ghost box.

That recording yielded several Class A EVP (words and phrases clear to everyone) as well as Class B (not everyone agreed) and Class C (sounded like words but little agreement on interpretation):

EVP in the Auditorium by ghost box

When we asked for the names of those with us, early on we got "Pearl" and "Tom" (this latter name twice, once as a whisper). And both names also occurred later in the session. Listen for "Pearl" again during the Burst Mode.

Other seemingly intelligent responses came when Elizabyth asked if anyone had a message ("Best not"), when Kym asked for how many joined us ("Three" repeated twice in succession), and when Chris asked for the date ("May 10" -- which it wasn't for us but might have been significant for the voice that replied). Listen also for the response to Mark's question about why they remain there ("For help") and a Class A EVP from the Burst of "Don't be terrified." We weren't -- but then, the message might have been for another unseen presence. 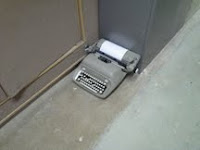 We next moved to the costume shop below the main Auditorium, where cast and crew have reported tapping noises from an old electric typewriter stashed in the hallway next to the shop. (Before the investigation, Wraiths team member Doug had placed a sheet of paper in the typewriter even though the machine was unplugged and the ribbon didn't work.) We checked the machine during the investigation for elevated EMF -- and for typed words -- but no joy in either case.

We conducted an EVP session in the costume shop and captured EMF spikes as we recorded an exchange between two voices that seemed largely oblivious to our presence (except for one early mention of "Hey, Kym" -- EVP often acknowledge her!) That exchange was brief:
MALE VOICE: What's up?
FEMALE VOICE: Zach?
MALE VOICE: Yes, ma'am. Zach.

Our final stop was in the Taylor South Hall, where a faculty member had given us permission to investigate his office. The prof's room was situated in a suite of faculty offices, and on more than one occasion, he had heard commotion in two unoccupied empty offices directly across the hall when he worked after hours.

Only three days before our current investigation, he had been working at his desk and noticed his analog watch's minute hand had began to spin around the face. Almost immediately, a book firmly lying on the desk toppled off the edge to the floor. These events occurred later on the same afternoon Wraiths team members Mark and Doug had conducted a preliminary sweep of the building, taking readings and announcing to any unseen presences that we'd return in a few days.

In that prof's office, we conducted an EVP session via ghost box and captured a response of "Five" to the number of spirits present and, once again, the announcement that "Em" was there. (See our previous account of the session in the Taylor Hall main corridor, where "Em" spoke to us several times.)

To Mark's query of why they were there, we recorded responses of "Ask, we can help." When Kym asked if the spirits present were okay with that particular prof sharing their space, the answer was immediate: "We shall see." We all remarked on the grammatically correct modal verb of "shall" for first person rather than the more common "will" these days. A response from an earlier, more proper era? Perhaps just a spirit mindful of the halls of higher learning.

[We'll soon insert a portion of that EVP session in the office, once we've had the opportunity to refine the raw audio file. Check back!] 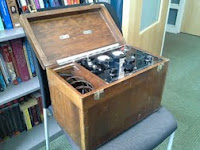 When we'd first entered the office for the investigation, we noticed an antique wooden cabinet that was once an electroshock unit. The device sat adjacent to the toppled book event reported above, and we wondered if it might be related to possible poltergeist activity in that and the nearby offices.

We couldn't help but muse that perhaps not just the walls but even the furnishings *do* sometimes "talk."

The Taylor Hall investigation was a success, in our opinion, and we plan to revisit to see what further evidence we can gather at a future date.


* * *
Our next posting will recount our recent adventure in an isolated rural 1880s ranch house, which current owners had asked us to investigate. Seemed that unhappy spirits had driven off previous tenants and the new owners wanted to make peace with the long-term "caretakers." We were joined by a psychic, and boy, was that place ever haunted!

We're still having as much fun documenting current and ongoing investigations as we did conducting the investigations over the past year and a half for our book, WILD WEST GHOSTS.

There are puzzling experiences and encounters aplenty out there, and you just may want to pick up a copy of that book for either armchair musings or else as a guide for your own expeditions into the fascinating world of the paranormal.

You can buy the book as either an e-read or a trade paperback. Visit our Website for links.

In the meantime, happy hunting!
Posted by Kym-n-Mark Todd at 4:15 PM