This is the third in a four-part series featuring some of the past year's best evidence from our paranormal investigations. This week we share our most intriguing video documentation. 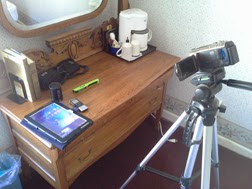 We seemed to be slow learners.

Well, at least lazy ones at first. It took us a while to realize just because nothing seemed to be happening during an investigation, that didn't mean we should let up our guard.


Ghosts don't seem to work on our timetable. (Duh.) In fact, they often seem to respond when it suits them.

We learned the hardest lesson during one of our earliest investigations, this one at the Hotel Norwood in Norwood, Colorado. At that site, we moved our inquiries a half dozen times (lots of reported hotspots at this hotel), and toward the end we got lazy in setting up our camcorder to document findings. We'd already experienced multiple encounters during the visit, including a poltergeist incident involving a cup flying off a table (not our fault we missed capturing that one since it occurred while we unpacked), a cold spot, and EVPs that repeatedly led us from one locale to another.

By the time we made our last stop, we were tired and sloppy. Big mistake. In the final location, we didn't set up the camcorder -- just as our spirit box announced, "Flashlight," which we hurriedly pulled from the bag and switched on. At that moment our EMF meter jumped 45 fold, from a baseline of 230mG to 10,710mG! A second later, our flashlight dimmed and then completely winked out.

A stunning correlation of spirit box, EMF meter, and flashlight -- even our new batteries drained completely. And we failed to document the incident. It'd be an understatement to say we felt chagrined. We just knew we'd never experience a similar event during future investigations. Fortunately we were wrong, and many times over. In our subsequent paranormal inquiries, we took care to record what we did and what occurred at each locale.

Although we ultimately recorded to camera eight other successful flashlight experiments during our 20 investigations, below are three experiences representing some of the strongest evidence we captured of unexplained activity -- two involving flashlights and one involving a flurry of orbs around a co-investigator.

The Beaumont Hotel & Spa
The proprietor told us she couldn't think of a single room or space in this hotel in Ouray, Colorado, that didn't harbor accounts of paranormal activity, and our own on-site inquiries produced results confirming her claim for the three locales we visited, including three separate and successful flashlight experiments.

We'll discuss some of our other experiences at the Beaumont in the next article, but the following video clip is a typical response we received using a flashlight. The light we used had a switch requiring a firm, deep push and "click" to engage. Notice in the background we ran our EchoVox spirit box during the experiment, set for reverberation, and you can hear the echo effect for our own queries as well as the voices produced by the box.

Flashlight Experiment at the Windsor Hotel.

Notice the above video clip includes a clear response of "No" to our query to try turning off the flashlight. But we also invited any spirits present to simply dim the light, which they could do very well, and to dramatic effect. We were also pleased by the number auditory responses this clip captured as we coaxed spirits to interact with us.

The Vintage Inn
Our investigation at this Gunnison, Colorado, B&B produced another classic flashlight experiment -- but with a startling twist we only realized on later analysis.

This investigation was different for two reasons. First, the building certainly looked the part but had no history of hauntings. We went in on a hunch because we thought it had the look and longevity of a place that ought to hold paranormal potential. And second, the owner wanted to accompany our investigation out of curiosity. We had no objections, inviting her to help set up our equipment and even inviting her to question her invisible B&B "guests."

The following video clip once again records our spirit box (this time without reverb) and allows you to hear the interaction with the voices we recorded both before and surrounding the spirit manipulation of the flashlight. Listen especially for their polite acknowledgements of our thanks for interacting with us at the end.


Flashlight Experiment at the Vintage Inn

When we analyzed this recording later that day, we discovered something that astounded us. Listen again to the above clip for the voice saying "Good" and then Kym moments later saying the same thing, this exchange occurring from 00:26 to 00:30. And in particular, pay attention to the voice inflections, which match exactly.

What may not be apparent from this exchange is that the spirit is talking under Mark's chuckle -- he was poised very close to the experiment. But Kym was on the other side of the room at the time. She couldn't hear that spirit voice, drowned out at the time by Mark's voice. (We've amplified the spirit voice at this moment in the recording to make it easier to hear.) In other words, the spirit "repeats" Kym's voice, mimicking her inflection *before* she utters her response to the the spirit saying, "Happy" five seconds earlier in a loud, clear voice.

The implications are profound, even if illogical.

Our recording leads us to conclude the spirit mimicked Kym's inflection and response but "repeated" it back before Kym's arrow of time uttered it.

We've heard other investigators report that EVP recordings have sometimes only made sense when played in reverse. Others report receiving answers to questions before investigators ask. For such occurrences to be meaningful, spirits must not be bound by our arrow of time -- a conclusion consistent with the notion they're also no longer bound to the space-time plane of existence. Do they choose the When of their interactions with us, synching to our own arrow of time so we can understand and engage with them?

Before we wax any more epistemological, let's move on to our final evidence.


Lawmen and Outlaws Jail Museum
For this investigation, we teamed up with Hotchkiss Paranormal Investigators (HPI) for a lock-down at the Old Jail Museum in Cripple Creek, Colorado. We spent half the night at this site.

It was the fourth visit to the jail museum for HPI, and that team had a harrowing encounter with a malevolent spirit that actually attacked two members of the group on previous occasions. The spirit is known as "Joe," a pedophile incarcerated at the jail until his death. (Even Zac Bagans & Co. have investigated this location and interacted with Joe for their Ghost Adventures television series.)

All our previous investigations had occurred with spirits that seemed benign or, at the very worst, mischievous. We felt a bit nervous to up our game to this level of paranormal  inquiry, but we also wanted to see what our own reactions would be under such circumstances. Turned out we were up to the challenge.

The following clip records a portion of our time in the confinement cell where Joe spent much of his time while alive and, it would seem, still does now that he's dead. The camera focuses on investigator Seth Davis, one of the HPI members previously assaulted by Joe. For this session -- and the only ones present during this filmed inquiry were Seth, Kym, and Mark -- Seth donned vintage inmate clothing the museum had on hand.

We finally got our orbs, and in spades. We actually captured close to 30 orbs over the next 15 minutes but decided to restrict the video clip to the beginning minutes, capturing a dozen or so in rapid succession. That's Kym's voice behind the camera. Did you notice how cocky she gets? In the end, it never even occurred to us to be nervous or apprehensive during the investigation. 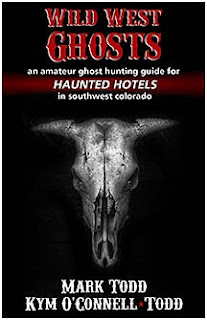 WILD WEST GHOSTS: an amateur ghost hunting guide to southwest Colorado, is available now as a trade paperback from Amazon and Barnes&Noble. Also available as a Kindle e-book.

We also invite you to LIKE our new Facebook page for the book, where we're providing updates as well as continuing paranormal events and investigations.