All this past fall and spring, we reported on our latest book project -- haunted hotels in western and mountainous Colorado -- and we used our blog to share highlights about our visits (and ghost hunts) to each location. You can click on the tab just under our blog banner called "New WIP Ghost Hunt Book" for more context and a bit of backstory about the project. 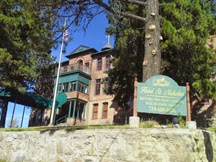 
This time our ghost hunt took place in Cripple Creek's 1880s Hotel St. Nicholas, which had also in its early years served as a hospital for the Sisters of Mercy.

But first a S/O to owner Susan Adelbush, who welcomed us warmly and even put us in touch with others who had experienced uncanny things at the hotel.

The building contains a lot of reported paranormal activity, including a small girl who wakes sleeping guests, a full-bodied apparition wearing a bowler hat and long duster coat, invisible children playing in the hallways, and disturbed objects.

Susan gave us a walking tour of this large sprawling hotel – all three floors – pointing out along the way where various paranormal activity had taken place, including the lounge on the first floor where the bowler-hatted apparition had walked partially *through* a patron and then on to walk through the wooden bar in front of him.

We focused, however, on the guestrooms and upstairs hallways. We started in Room One, the old nuns’ quarters (when the building was a hospital), where the same bowler-duster apparition had also appeared. The suite consisted of a sitting room with futon bed and connecting alcove and bedroom. Our EMF baselines hovered in the low 300mG range for alcove and bedroom, but higher in the sitting room – around 500mG. We decided to record a spirit box session in the sitting room. We heard very little in real time and later analysis. Perhaps the apparition had intimidated everyone, and he himself wasn’t talking.

We were itching to get to Room Eleven, the old operating room when the hotel was a hospital, so we packed up and headed to the other end of the floor, up the short ramp to the room, and through the double doors – still in place from an era when hospital personnel pushed gurneys into surgery.

Initial EMF readings of 300-400mG leaped to 920mG when we began our queries using a spirit box. From there forward, the EMF remained in the 800s. No wonder – the cacophony of voices that erupted from the box made it nearly impossible to carry on a coherent conversation at first. The chatter became so disruptive we had to ask them to slow down and not all speak at once.

The voices did let up a bit, and we could pick out “hurt,” “broken,” and “sick.” When we asked one voice why he was there, the response came back “accident” followed by a puzzled woman’s voice saying, “They killed it(?)” (Listen to included YouTube clip of this event below.)

We encountered that phrase again in later analysis, along with a lot more we hadn’t detected in real time. At one point, we felt like spectators to murmured exchanges between one male and two female voices that seemed to be involved in a medical procedure – “first up,” “Godfrey” (twice), “excuse me,” and “danke” (German for “thank you”) all came in rapid succession. In fact, we heard a lot of German inflections. We asked for names and got “Shultz” and “Ander,” among others. We also heard “Anne,” Stephen,” and “David,” followed by a woman’s voice saying “Dave hurts.” The word “fear” came up three times, as well as “axe,” “hit,” “lung,” and the phrase “I watched it.” (Listen to YouTube below.)  When we asked who else occupied the room, a woman’s voice offered, “Kym,” suggesting awareness of our own presence.

Even in real time during the on-site session, we began to feel auditory overload using the spirit box, so we trotted over to Room Six. This had once served as a ward room. The first utterance we heard from the box was a child’s voice, sounding like a play shout – the first time in any investigation we'd heard a child's voice on our spirit box. Other voices soon drowned out that first one and, no matter how many times we asked the child to speak again, we never heard it. In later analysis, we isolated a number of clear utterances in response to our other queries. We had asked if someone could turn off the flashlight, getting an immediate “no” in a man’s voice. When Kym asked why not, a woman responded, “...weak...” We asked for names and received “Opfer” (German for “victim”) and “Bob” twice. In response to our question of what happened in that room, different voices said “...fear...” and “...help me.” We asked what scared them and a woman’s voice responded, “Murphy.”  Right before we left the room, a man with a German accent said, “Good luck.”

Our final stop was up the stairs to the third floor hallway. This area had received comments about invisible children playing outside guestrooms. The EMF readings in the hall were in the 590mG range with little fluctuation during that session. We asked for someone to use the energy of the flashlight to turn off the light, and a voice responded, “No.” We asked who was there and got “...me...” soon followed by “Bob” and “Fred.” We again detected German inflections and asked in that language if any of the spirits were from Germany. The reply was “ja.” Later analysis confirmed “ja” again, followed by “Deutsch.”

During our time at the hotel, we never encountered the apparition in bowler hat and duster. Or maybe that was the German spirit? We hope future amateur ghosthunters using our guide book will have the “good luck” to see him themselves.


In the next blog article, we share highlights of our ghost hunt to South Fork's Spruce Lodge, where we encountered types of paranormal activity we'd yet to experience!

Don't forget you can follow along during our investigations as we live-tweet from Twitter @writeinthethick. You can check out our Facebook page for updates about dates and times.
Posted by Kym-n-Mark Todd at 9:32 AM