An interview with fictioneer Teresa Milbrodt 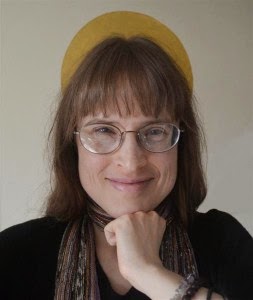 [This is part of our monthly series of guest posters.]

We wanted to talk directly to Teresa Milbrodt about her stories and books. She’s writes magical realism, fantasy, and just plain weird fiction. She has three large mailbags full of rejection letters she’s collected over the past 10 years, but that’s okay. It gives her a bit of a vantage point – a throne, if you will – to gloat over the fact she now publishes four to six stories in major lit journals every year.

And with two books under her belt and two more forthcoming next year, she’s a force unto herself!

But we’re concerned all these fantastic plots and characters may be unhinging her a bit, and so we decided to get to the source:

An interview with “Cyclops,”
one of Teresa Milbrodt’s fictional characters

Kym-n-Mark: We want to thank you for agreeing to talk to us secretly.

Kym-n-Mark:  Uh, okay. Well, if this intervention for Teresa is going to work, we need to understand why she’s teetering on the edge of so much … weirdness. There’s just no other way to put it.

Cyclops: Tell me about it.

Kym-n-Mark:  And we know you are major character in her new novel, The Patron Saint of Unattractive People. We think you may be essential in helping her reconnect with reality. So, Cyclops, tell us why you think she spends so much time in your head. Or is it the other way around?

Cyclops: Talk about needing to reconnect with reality!  I mean, she’s an okay writer and all, but she couldn’t make a decent espresso to save her life.  What business does she have writing about coffee shops
and baristas if she’s never made a double-shot mocha? You can’t write about working in the trenches if you’ve never been in them, I say. And she gave me absolutely no love life for the better part of thirty-seven years.  I mean really, doesn’t she think I’d like to get out from time to time and have a little fun?  Just because she’s a crazy workaholic doesn’t mean I have to be one, too.  At least she didn’t make me a vegetarian.  God, that would have been awful...

Kym-n-Mark: Okay, okay, we get it. But back on topic, how would you suggest –

Cyclops: She also let my mom take up smoking again, and I don’t know if I can forgive her for that one.  Have you seen those lung tissue samples that they have on display in science museums, you know, in those exhibits about the dangers of tobacco?  Disgusting, but then my mom has to go back to her half-pack-a-day habit thanks to my dad stressing her out.  Why couldn’t she send them to a good marriage counselor rather than letting my mom get back to old habits?  She’s tried to tell me a bunch of B.S. about the cigarettes being good for plot and tension because it pissed Dad off as much as it pissed me off, but
really, this is my mom’s life we’re talking about.  I’m sure she wouldn’t like it if I made her mom take up smoking.

Kym-n-Mark: Er, Cyclops, we really wanted to talk about Teresa and her problems with reality.

Cyclops: She didn’t even let me have a proper name.  I’m just the cyclops woman throughout the entire book, and what’s up with that?  But I guess she gave me a cool record collection.  That’s one nice thing I can say about her.  Get back to me in a while, and I might have come up with something else.

Kym-n-Mark:  Uh, yeah, maybe we will. And we’ll let you know how the intervention works out.

The Patron Saint of Unattractive People is forthcoming in September, 2013, from Boxfire Press.

In the meantime, check out her backstory at her Website, where you can read some of her selected published and unpublished stories, excerpts from forthcoming works, and deleted scenes from various projects.

Be sure to check out these video clips of Teresa reading from her "Larissa" alter-ego series (the short story collection is forthcoming next year!)

(Thanks, Teresa, for playing along!)

All gestes aside, we invite you to comment or visit with Teresa. She – or one of her fictional alter-egos – are bound to answer!
Posted by Kym-n-Mark Todd at 3:25 PM

American Colonies: The Settling of North America
by Alan Taylor
Over the past three years, the genealogy bug has really bitten me, and I've plunged into genealogical and genetic research that started putting together the pieces of who I came from. But when I'd learn that so-in-so moved from Virginia to North Carolina, and then the next generation split up to move on to Mississippi or Kentucky or Alabama, the documentation rarely told me why.

Enter Pulitzer Prize-winner Alan Taylor's American Colonies, the sort of historical nonfiction book I hoped could help explain what had inspired my assorted great-great grandparents to migrate to and among the various colonies and territories of British Colonial America. And wow, did I ever get what I bargained for.

Though not with what I expected. My doctorate had specialized in eighteenth-century American Studies, and I thought I had a pretty good handle on the times. But what Taylor's excellent and very readable prose provided was the disturbing exploitative nature of English colonial empire-building.

Taylor's opus is organized chronologically by colony (or territory), repeating the chronology for each colonial initiative, explaining the politics and socio-economic dynamics that existed on both sides of the Atlantic Pond. We think politics is complicated these days (and they are), but complexities faced by our ancestors equal ours in every way, and more.

Nonetheless, the underlying story is framed to explain the systematic displacement of indigenous populations and slave-driven economies fueling much of early colonial development. Taylor does this with copious statistics and first-hand accounts and justifications by our ancestors, but the author's tone is even and never descends into judgmental asides.

It felt like getting back into the classroom to learn a history that hasn't been sanitized by the victors, sobering but compelling.